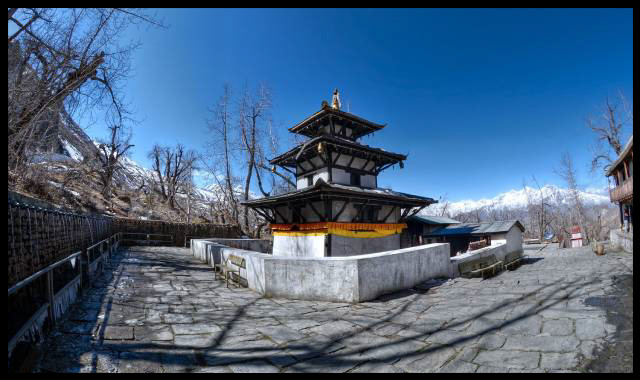 Muktinath is a sacred place both for Hindus and Buddhists located in Muktinath Valley (behind the Grate Himalayan) at an altitude of 3,800 meters, on the way Annapurna Trekking route, Mustang, Nepal. Mukti Kshetra (51 shakti pitham )which literally means the "place of liberation or moksha" or where the temple of Muktinath is situated, is mentioned in the Hindu Scriptures such as the Ramayana, Barah Purana, and Skanda Purana.

There are 108 sacred water spouts (springs) where pilgrims take a ritual bath. Nearby is a temple called Jwala Mai considered sacred and worshipped by both Hindus and Buddhists. An eternal blue flame keeps burning in the temple.
Every year thousands of Hindu devotees come to this Temple from around the world. This Temple is one of the famous holy places for Hindus & Buddies, so every year thousands of tourists visit this Temple. In this temple, there is a mix in culture Hindu gods & Buddies priests (Jhum- buddies lady monk Aani ). Jhuma ( Priest) of this Temple is not allowed to marry.

The place partly owes its fame to the fossil stones, called Shaligram - considered holy by Hindus - found along the Kali Gandaki River. The fossil stones are said to represent Lord Vishnu in stone form. The temple dedicated to Lord Vishnu is simple in architecture and built-in pagoda style. It is believed to have been constructed at the beginning of the 19th century. As the idol of Vishnu is considered to date from the 16th century. Many Hindu pilgrims from Nepal and India visit the site to worship Lord Vishnu. Buddhists call it Chumig Gyatsa, which in Tibetan means 'Hundred Waters'. Although the temple is has a Vaishnava origin, it is also revered in Buddhism.

For Group enquiry please call us or send an email for a better discount.

HolyPashupatinath Temple is One of the most sacred Hindu sanctuaries in Nepal – Pashupatinath Temple is situated on the two banks of the Bagmati River on the eastern edges of Kathmandu. Pashupatinath is the most significant sanctuary devoted to god Shiva. Consistently this sanctuary pulls in a huge number of Hindu travelers. They touch base here to discover cover throughout the previous a little while of their lives, to meet demise, be incinerated on the banks of the stream, and travel their last adventure with the waters of the holy waterway Bagmati, which later meets the blessed stream the Ganges.

Manakamana Temple (15 Minutes by link vehicle ropeway ride up to Hill). The Manakamana Temple arranged in the Gorkha locale of Nepal is the sacrosanct spot of the Hindu Goddess Bhagwati, a manifestation of Parvati. The name Manakamana starts from two words, "mana" which means heart, and "katana" which means wish. Loved since the seventeenth century, it is accepted that Goddess Manakamana awards the desires of every one of the individuals who make the journey to her altar to venerate her. The Manakamana sanctuary lies 12 km south of the town of Gorkha. The sanctuary is situated on a recognized edge 4,272 ft above ocean level.