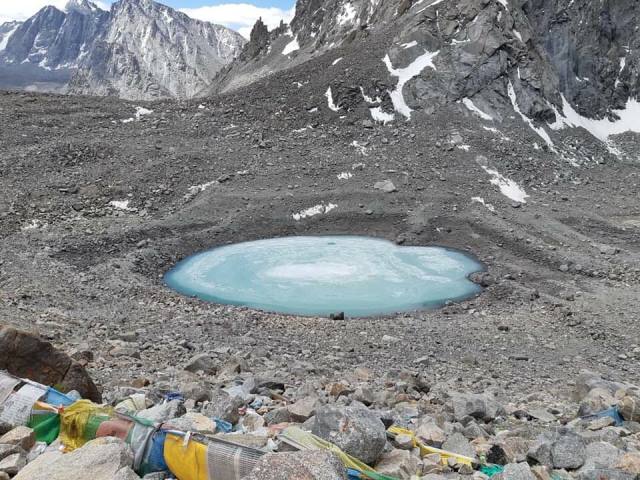 Gauri Kund, a water body that also holds the title of Lake of Compassion, and lies on the way while going on downwards from Dolma - La (Dolma Pass). Descent from Dolma Pass, this steep is a wonderful lake which is at an altitude of 5608m. This Kund occupies a highly auspicious place in Hinduism. As the name suggested, this place is related to Mata Gauri. Our Holy sculptures state the same. Gauri is the Wife of Lord Shiva. Another name of Mata Parvati Gauri. The lake is also very popular as “Parvati Sarovar”. As per Hindu Mythology, this was the place of bathing for Mata Parvati. She created Lord Ganesha here, using her dirt of body. She appointed Ganesh to Guard the door till she baths. Later on, Shiva killed Ganesha, and gave him life again, and granted him the boon to be the Vighnaharta Devta. Also, he made it compulsory to make lord Ganesh happy before starting any work. Therefore, Hindus worship the lord Ganesh before starting their work. Bathing in Gauri Kund is one of the most auspicious things. As per belief in Hinduism, if you did not complete the bath here, you did not complete the Kailash tirtha. The Place is so much auspicious. Most of the people claim that after bathing in the Gauri Kund, their no treatable diseases got r away. Most others claim that they were highly tired when reached the place, but after having the bath, all their Tiredness got lost somewhere. This holy place has the boon of Lord Shiva, Mata Gauri, and Lord Ganesha. Also, as per Hindu mythology, if a son takes her mother here at this place, then lord Ganesh himself takes care of him and helps him all the time because Ganesha loves those who take care of their mother.