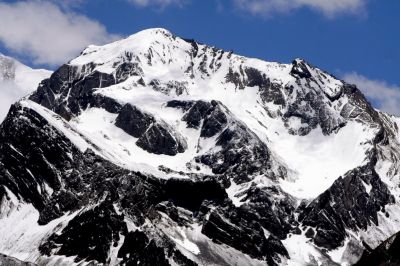 As the name suggests, the holy OM POm Parvat Tourarvat is dedicated to Lord Shiva, the almighty god. In Hinduism, He is also famous as the Devon Ke Dev, Mahadev. So, the Om Parvat has its great importance in Hinduism. 6191 m in height, this holy Om Parvat is close to Adi Kailash mountain. This mountain is in the Himalayan mountain range lying in the Darchula district. “Om Parvat is a miracle of nature; the snow lays in the shape of perpetual “Aum” the primordial sound”. One can see white (snow) Aum on black background. For visualizing “Aum”, you don't need any hypothesis, assumption, and imagination. The symbol and guide to mediation connecting man, God, and the Universe chanted at the beginning and finale of all proceedings, extolled in the Upanishads as the best and most effective symbol of God. Near Om, Parvat lies Parvati Lake and Jonglingkong Lake. Jonglingkong Lake is sacred, as Mansarovar Lake, to the Hindus. Opposite to this peak, there is a mountain known as the Parvati Muhar with a pass with the same name. Hindus feel It lucky to have the bath in these lakes. They believe, doing it is a way to wash out all their sin. It's not so easy to have a tour to the OM Parvat though, but the devotional power that devotees have for Bholey Bhandari make things looking so easy. The harshing Climatic conditions may not harm them anyway during their journey. Therefore, Bhakatgans usually say "अकाल मृत्यु वो मरे जो काम करे चांडाल का, काल उसका क्या करे जो भक्त हो महाकाल का |" The place is not just beautiful, but also, it has an attractive natural and devotional fragrance. Travelers can view the Om Parvat on the route to the Kailash Manasarovar Yatra from the last camp below Lipulekh Pass at Nabhidhang India-China border.