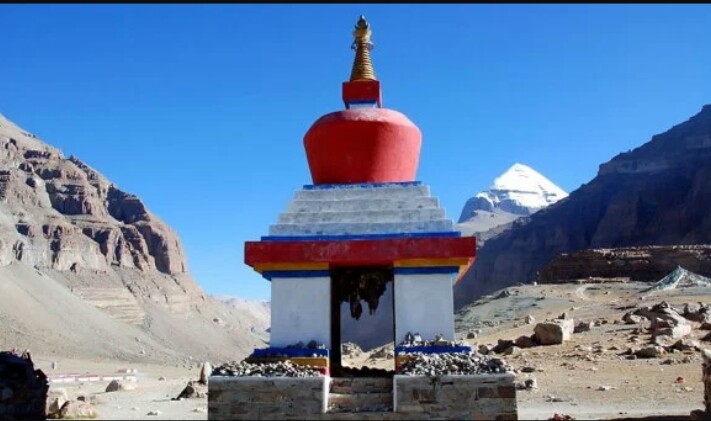 Yam Dwar is situated in Tibet (Tarboche) at an elevation of approx. 15500 feet, that takes 15 Kms drive distance from Darchen. The meaning of the Yam Dwar in the Hindi language is “the gateway of the God of Death”. It is the starting point of the circumambulation of Mount Kailash. Therefore, it has a prominent position in Hinduism. To visit the Shiva's home, one must pass through the Yama Dwar. It is the starting point of Kailash Tour. As per belief, the Yamraj himself guard this home of Lord Shiva. The lord of death is we called Yama and the Dwar we called as Gate therefore, it’s called Yam Dwar. Yama, who brings mortal souls to his Yamlok and make the judgment of one's merit & sins. Tibetan People believe that Kailash is the home of 'Demchok' (Demchok is the name of their deity). Therefore, every year, they establish a new prayer flag-pole in Tarboche. The colorful Tibetan flags have its depth meaning. Therefore, Tibetans arrange flags in the specific color sequence which is “blue, white, red, green, yellow”. They arrange flags from left to right. Blue colored flag is a representation of the sky, the white color is of air, the red color of fire, the green color is of water, and the yellow color is of earth. Therefore, all these flags together represent the balance establishing life on earth. It’s an entrance that a devil power may never pass through. This way, Yamraj also shows his devotion to Lord Shiva by protecting the bhaktas of Bholey. As per Hindu mythology, if you just complete the circumambulation of Yam Dwar, you have completed the Kailash Yaatra. As per Hindu mythology, after completing the Yam Dwar Cicumbulation, Individual will get the place in heaven. Yam has the duty to judge you deeds after your death. But, as per belief, if you pass through this dwar then Chitragupta removes all your evil deeds from the book of judgment. Chitragupta is the accountant of Yamraj. He keeps accounts of all good and bad deeds of each and every individual. In Hindu Mythology, there are so many stories about this holy yam Dwar that proves how much auspicious and powerful this Dwar is. Therefore, you must see it once.